Democracy rhetoric or a Practice ?

Although exact dates for the presidential election has not yet been declared, it is clear that the enthusiasm and interest over the upcoming presidential run in the country is significantly increasing. The candidates of two major political camps have already been announced; they are the candidate of the SLPP lead alliance and the candidate of the JVP lead alliance. Another interesting fact is that discussions about the UNP candidate is also showing a tendency of growing into an internal crisis of the party.

Gotabhaya Rajapaksa has already commenced his campaign as the candidate nominated by SLPP and Sajith Premadasa has stated that he will contest the election even though he is not yet offered the official candidature from UNP.

Some argue that after the 19th amendment, president even cannot hold the portfolio of defense.  Some legal experts responding to this argument say that the presidential system is valid in the future in the same manner as president is still granted the powers by the constitution to appoint the permanent secretaries to the ministries and many other high-profile positions.   Others feel that the 19th Amendment will not have a serious impact if the Prime Minister and the President are appointed from the same camp. However, it is correct to acknowledge that a change in the portfolio of the executive president could be expected after the presidential election. 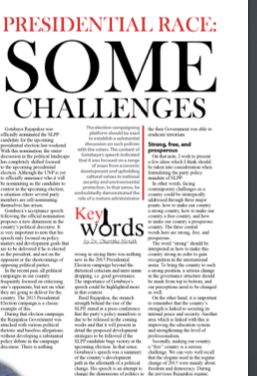 Gotabhaya's speech in accepting the official nomination proposes a new dimension in the country's political discourse. It is very important to note that his speech was only focused about policy matters and development goals that are expected to be delivered if he is elected as the president but not about the opponent or the shortcomings of the opposition political parties.

In the recent past all the political campaigns in our country have always focused on criticism on the opponents but not on what they are going to deliver to the country. The 2015 Presidential Election campaign is a classic example of this

What happened during that presidential election was to attack the Rajapaksa government with various political rhetoric and baseless allegations without developing a substantial policy debate in the campaign discourse. There is nothing wrong with saying that there was nothing new in 2015 presidential election campaign beyond the rhetorical criticism and mere name dropping such as good governance. The importance of Gotabhaya's speech could be more highlighted in that context.
Read more »
Posted by Note Book at 12:35 AM No comments:

It is a well-known fact that the attention of the entire society is focused on the next election. Some feel that there is a possibility of holding the provincial elections before the presidential election. 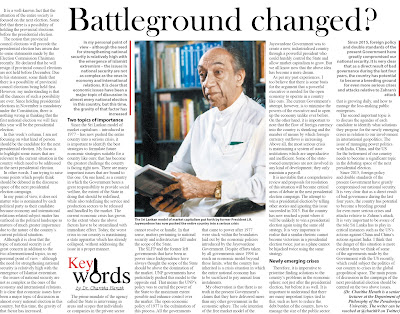 In other words, I am trying to raise some points which people think should be debated in the discourse space of the next presidential election campaign.

In my point of view, it does not matter who is nominated by each political party as their candidate because economy and international relations-related subject matter has surfaced in the political landscape as matters of much greater importance due to the nature of the country’s current political situation.

The issue of banning a social media page has once again become the talk of the town in Sri Lanka. It seems that the government has banned the social media page of a young popular musician. It appears that a large number of people are coming forward against this baseless ban, regardless of their political opinions. Since this social media page is one of the most popular pages which has over 100,0000 followers with a significant social power, there could have been some hidden agenda behind this sudden ban. It is true that it’s only one individual who is subjected for this incident, but the blocking of social media in that way has an indirect link with the rights of every citizen in the country. 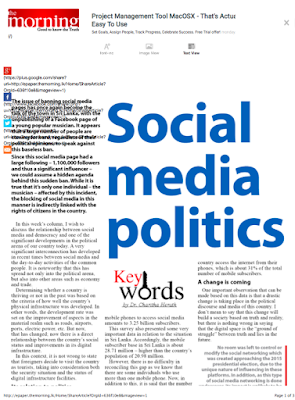 In this week’s column I wish to discuss the relationship between social media and democracy on one hand, and on the other hand, one of the significant developments in the political arena of our country today. A very significant interconnection has been developed in the recent times between social media and day to day activities common people. It is a noteworthy factor that this has spread not only in to the political arena but also in to the other zones of social life such as economy and trade.

The fact that whether a country is thriving was measured in the past based on the criteria how well the country's physical infrastructure has developed. In other words, development ratio was set against the improvement of things in the material realm such as roads, airports, ports, electric power, etc., But now that the situation has changed, and there is a direct relationship between the fact whether a country has achieved better social status and how the digital infrastructure of that country has changed. In this context it is not wrong to state that foreigners decide to visit a country as tourists, taking into consideration both the security and the status of digital infrastructure facilities. 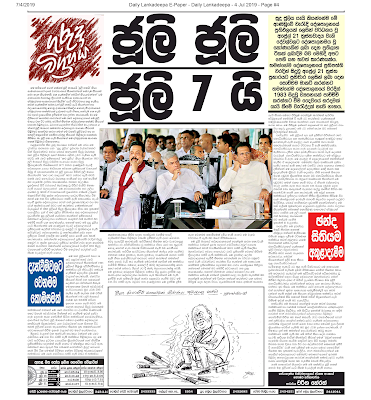 Last week president himself declared 19th amendment is the root cause of the political chaos in the country. President further went on to say that both 18th and 19th amendments are politically incorrect as 18th amendment paved way for pacifism while 19th amendment paved way for anarchy in the country. If he is raising this point with the idea that he himself and others who were instrumental in bringing in this reforms made a mistake, then it can be accepted fact for all of us. However, in my point of view, the underlying idea in president’s statement demonstrates the fact of unskilled governance which has become the key issue in our political landscape. 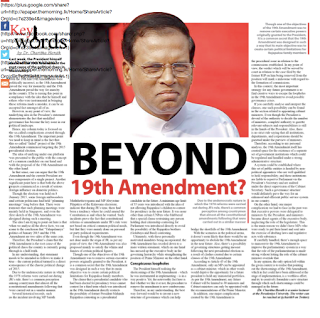 Hence, my column today is focused on the so called complications created through the 19th amendment. The important point which we need to keep in mind is the fact that this so called “failed” project of 19th amendment commenced targeting the 2015 presidential election. The idea of unifying under one platform was presented to public with the concept of common candidate on one hand and with the proposal of 19th amendment on the other hand. In that sense one can argue fth amendment and current president are two components of a single project. Another significant point here is that both the above projects commenced as a result of serious foreign influence in domestic politics. Though the election was held on 8th January 2015, some foreign ambassadors and certain politicians have held “planning meetings” long before that. There were rumors saying that such planning meetings were mainly held in Singapore and even the first sketch of the 19th amendment was designed during such meetings. The idea what I am trying to point out here is that when we analyze all above facts we can come to the conclusion that “yahapalana” politics of 2015 January and 19th amendment are two sides of the same coin. Therefore, president’s claim that 19th amendment is the root cause for the political chaos which country is currently going through, is a half-truth.  In my understanding that statement needs to be amended as follows to make it a true statement; the current political turmoil is a direct consequent of the chaotic political change of 2015.